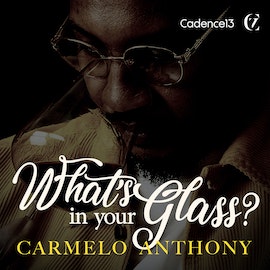 This week, Carmelo welcomes in four-time WNBA champion, five-time Olympic gold medalist and one the greatest players to ever pick up a basketball, Sue Bird. Over a glass of Moët, the two discuss the evolution of the WNBA and its rising influence on the younger generation, the role of the athlete in the larger fight for social justice, life after basketball, and so much more.

On today’s show, Melo sits down with the recently retired NBA veteran JJ Redick. The two discuss JJ’s decision to walk away from the...
Let's Go!

Join 10-time NBA All-Star Carmelo Anthony as he sits down for a glass of wine with the biggest names in sports, music, business, media, and entertainment. Each week, listeners will feel like they’re in the room learning more about Carmelo and his iconic guests as they discuss their favorite bottles and the experiences that they bring, which serve as a jumping off point for a greater conversation around current events, cultural moments and more. And get comfortable, because the conversation always gets better on the second glass.