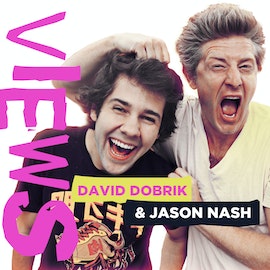 On this week's show... Things get intense! David thinks he's going to get kicked out of the country (Jason disagrees), Jason asks David if they're actually friends, before diving into what constitutes a friendship, and the guys talk about David's upcoming 21st birthday party in Vegas. Also, Jason weighs in on whether or not heaven is real, and goes off on David over his answer to a "would you rather" scenario regarding the death penalty. Welcome to VIEWS.

TRYING TO GET LAID

On this week's show... Jason's having a rough time. First, he didn't get free underwear (David did), then he went on a really awkward...
Let's Go!

On this week's show... David and Jason talk about last week's fiery death penalty discussion, how both David's parents and their manager...
Let's Go!