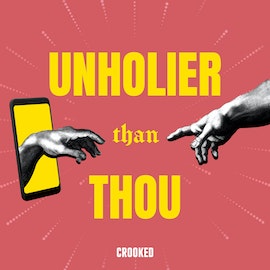 Why Muslims Are Starving in ICE Detention

Why Muslims Are Starving in ICE Detention

This week, Phill starts by discussing Jerry Falwell Jr’s resignation from the evangelical Liberty University amidst news of an alleged sex scandal. Joining Phill is the Lutheran pastor Nadia Bolz-Weber, who helps to unpack the pitfalls of purity culture. Then, Phill takes a deep dive into a story that made headlines last week: an ICE facility in Miami is currently serving rotten halal meals to its Muslim detainees, with their only other choice being pork, a meat that’s considered haram. Phill talks to Nimra Azmi of Muslim Advocates to better understand the cruelty Muslim detainees in ICE detention are subjected to when trying to practice their faith. Then we hear from Aura Bogado, an investigative reporter at Reveal, who talks Phill through what’s at stake for immigration reform and the people at our borders, come November and beyond.For a transcript of this episode, please visit crooked.com/unholierthanthou.

The Surprise Guest at the DNC

This week at the first ever socially distant DNC, leaders from the party were invited to give speeches and remarks in support of the...
Let's Go!

The sanctity of abortion

This week, Phill dives into the most religiously fraught political battlefield of our time: Abortion. To better understand the fight for...
Let's Go!

We’re living in an unprecedented time, with many people looking for help and guidance in places they might not have looked to before. Journalist Phillip Picardi is one of them, with his journey coming as he re-evaluates his relationship with faith, spirituality and God. Picardi will take listeners on his quest to better understand his relationship with spirituality by learning how faith plays a role in other people’s lives, and with the help of the spiritual, religious, and agnostic, Picardi will guide listeners through the ethereal and worldly problems of the day, informed by his own on-and-off relationship with God. Through lenses both saintly and secular, Picardi will take a look at everything from sex to climate change, and how religion informs those discussions. New episodes every Friday.