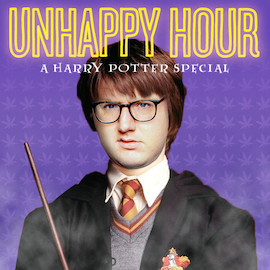 Evanna Lynch, a Harry Potter debate, and Matt gets high for the first time at Hogwarts. That’s right Unhappy listeners, this is a special Harry Potter themed episode! To explore Matt’s complex love/hate relationship with Harry (Potter, not Styles, duh), we first venture to Hollywood for a trip Matt will probably forget because he was really stoned. Then Matt gets into a heated debate with Entertainment Weekly reporter Marc Snetiker. And finally, a real live wizard of a wonderful human being, Evanna Lynch, who played Luna Lovegood in the films, joins the pod. PLUS! Matt gets sorted by that smelly ole hat.