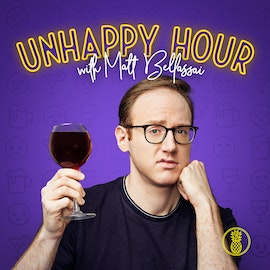 Anal eels, stolen ancient literature, and diving deep into Public Displays of Affection. After that, we have comedian Fizaa Dosani on the pod to cover the longest list of rants we've ever seen: bridesmaids, men in flip flops, phone calls, and her Clubhouse comedy series Facial Recognition Comedy. For DBWP, Matt wants to celebrate Lil Nas X and his "Gay Pop Stardom" (NYT piece written by former guest complainer Jazmine Hughes). Bari has been watching Ted Lasso and both Matt and Bari have been watching Schmigadoon. Follow Matt @mattbellassai, Bari @finkelbaripie, and the pod @UnhappyHourPod on Twitter AND @UnhappyHour on Instagram!

The Show No-No's (with Henry Golding)

Peppa the indoctrinator, feral pigs, and diving deep into going back to the movies. Speaking of movies, we have literal movie star and...
Let's Go!

Jaguar attacks, dumpster diving birds, and diving deep into the absurdity of the Olympics. After that, we have the Back Issue team back...
Let's Go!