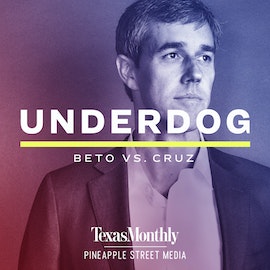 5: The Caravan and the Blue Wave

5: The Caravan and the Blue Wave

With days to go, the volume of news has felt overwhelming. Donald Trump has tried to fire up his base with claims about the migrant caravan in Mexico, while Democrats have touted early voting numbers as the sign of a coming 'blue wave' at the polls. What does it all mean? We turn to Larry Sabato from the University of Virginia, and Democratic political strategist Tom Bonier for answers.

With less than a week to go, Beto O'Rourke is behind in all the polls. But he's still getting huge crowds at rallies, and turnout for...
Let's Go!

On Tuesday, November 6th, Democrats had a better day in Texas than any Election Day since 1990. They flipped two House seats. Their...
Let's Go!

Go inside the most expensive, most talked-about political race of 2018: the U.S. Senate contest between Congressman Beto O’Rourke and Senator Ted Cruz. For a generation, Texas has been America’s ultimate red state. No Democrat has won statewide office here since 1994. Will this be the race where everything changes? Or will Beto-mania turn out to be just another fantasy? For the next month, Texas Monthly, chronicler of life in contemporary Texas since 1974, and Pineapple Street Media, creator of Missing Richard Simmons, will be traveling around the state of Texas, reporting in real time. We’ll go behind the scenes with the O’Rourke campaign, take the pulse of operatives and analysts and pollsters, and talk with the Texas voters of all political stripes who will ultimately decide which candidate and whose vision for the state will prevail.