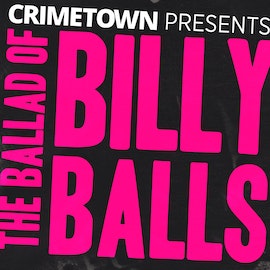 From the same team behind The Ballad of Billy Balls comes Crimetown, Season 2. This season, Crimetown heads to Detroit, Michigan. From its heyday as the Motor City to its rebirth as the Brooklyn of the Midwest, Detroit’s history reflects a series of issues that strike at the heart of American identity: race, poverty, policing, loss of industry, the war on drugs, and our universal desire for a savior. Detroit’s a tough town, and its residents are even tougher. They’ve weathered riots, a drug epidemic, political scandal, and innumerable other hardships, but they’re still here—and they have stories to tell.Learn more at www.crimetownshow.com.

S2 [BONUS] I'll Call You Back | The Ballad of Billy Balls

iO returns some of the many compelling listener calls, while Austin checks in with old friends.
Let's Go!

S2 [BONUS] The Lawslinger | The Ballad of Billy Balls