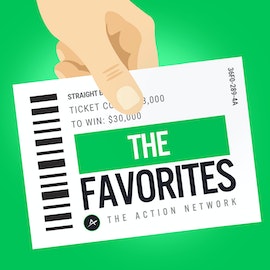 Chad talks to Action Network experts Justin Phan and Jason Sobel about the NBA conference finals and PGA Championship.But first, Twitter hero/heel Darren Rovell joins to talk about his new project on Twitter. Check out @darrenrovell this week to weigh in on the greatest TV show of all time. Then, Justin Phan breaks down how to play the Conference Finals, and if there's value to betting on the series price of Blazers Warriors. Plus Chad explains the phenomenon of the "Phan-Bomb" which takes place every time Justin makes a play in the app. Then, Jason Sobel talks about how he's managed to stay with his parents for every major golf tournament and who to play in the PGA Championship. With no value on Tiger, is there value in another big name like Bubba or Fowler?

Sports fans around the world place bets on the games they love, every week. It’s an exhilarating and rewarding experience unless, of course, you’re not getting the right advice. Introducing...The Favorites. Action's Chief Content Officer Chad Millman -- along with bookmaker Bob Scucci, Action Network Sr. Executive Producer Darren Rovell and pro gambler Simon Hunter -- break down the angles, the markets and the numbers driving the loudest conversations in sports. To win...or to cover? That is the question. And by the weekend, there's no question you will have the answers.