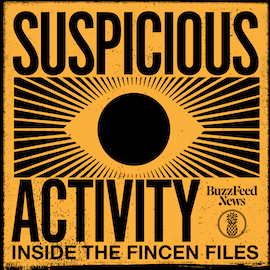 Episode Four: See Something, Say Something

Episode Four: See Something, Say Something

Two former employees of Standard Chartered say they were ignored and eventually fired when they reported accounts at the bank that looked fishy to them – accounts they suspected were violating U.S. sanctions against Iran. But as BuzzFeed News reporter Richard Holmes explains, there was someone else who thought many of the accounts were suspect enough to report to FinCEN: the bank itself.

Even in the finance world, Deutsche Bank has a troubled reputation. One of its darkest and most mysterious chapters happened when it...
Let's Go!

Throughout this reporting project, Jason Leopold and Anthony Cormier wanted to talk to someone who was the subject of a suspicious...
Let's Go!

Pineapple Street Studios and BuzzFeed News bring you this five-part series investigating how the most powerful banks in the world can facilitate the worst of humanity – terrorism, human trafficking, the drug trade – all in plain sight of the government.