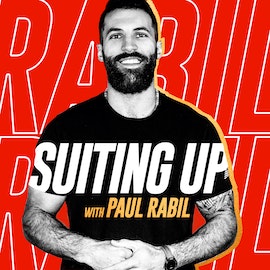 Welcome to an all-new season of Suiting Up Podcast. I'm your host – professional athlete and co-founder of the Premier Lacrosse League – Paul Rabil.Today's episode features one of the greatest athletes of all-time. Yet beyond the record-smashing, multiple MVP awards, and Super Bowl Championship, Jim Brown has impacted our human race arguably more so through his endeavors off the field – marked by his 2014 Muhammed Ali Humanitarian Lifetime Achievement award. On the show, Jim tells me about his upbringing in sports, the tactics behind his success – from his meticulous training regimen and game day prep, to his superior intelligence, including ways he would "win the mind game". Additionally, we discuss the impact Jim has made on society – from his charitable initiatives, to job creation programs for inner-city men and women, to his current efforts working with the incarcerated through extensive rehabilitation programs and post-incarceration job opportunities. Among everything he has accomplished and what's left in front of him, Jim's words of wisdom throughout the show our worth keeping a notepad and pen handy. Enjoy the show.With over 70 shows in our first 2 years of recording Suiting Up, we've interviewed guests like Bill Belichick, Venus Williams, Drew Brees, Gary Vaynerchuk and Tony Robbins – and every time, we learn a new skill, pickup an idea, or hear an unexpected backstory about how that person wielded greatness from their career.

Rebuild, Achieve, and Succeed in 2019

Happy New Year everyone! It’s 2019, the weather’s warm on the east coast, and there’s opportunity in the air. For the avid Suiting Up...
Let's Go!

Welcome to an all-new season of Suiting Up Podcast. I'm your host – professional athlete and co-founder of the Premier Lacrosse League –...
Let's Go!