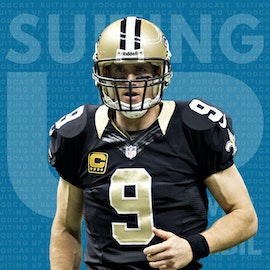 "I want to be the best football player I can be for as long as I can be." Drew Brees is a man of football records. For starters, he's the Big Ten record-holder in virtually every passing category. Since 2006, he has more touchdowns, passing yards, and 300-yard games than any other NFL quarterback, he's eclipsed the 5,000 passing yard season-marker five times in his career, where no other NFL quarterback has achieved this more than once. He's a Super Bowl Champion, MVP, Offensive Player of the Year, Comeback Player of the Year, and the list goes on. Off the field, Brees owns dozens of franchises, including Dunkin' Donuts, Jimmy John's, Title Boxing Club, and others. He's invested in tech startups, most recently leading a $10mm seed round with a Louisiana-based food delivery startup, Waitr. His investment thesis is tight. In Episode 13, Drew and I talk about recovering from career-threatening injuries, his crossover skill sets from NFL captain and quarterback to business operator and investor, and what characteristics he looks for from founders in pitch meetings as well as rookies in the NFL. Welcome to Suiting Up Podcast, where I interview athletes, media executives, team owners, and other key stakeholders about the duality of the modern professional athlete, their startup investing appetite, other strategic investments, NewCos, social media influencing, creative marketing and digital strategy. Today’s athlete, whether active or retired, is continuously redefining what it means to be a professional on and off the field.

“Athletes are crossover stars in business, fashion, media, news, you name it.” The business of sports has changed. Athletes have more...
Let's Go!