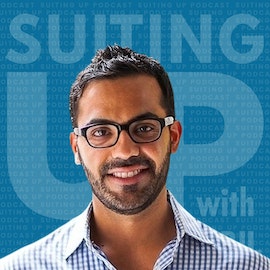 Deepen Parikh is a partner at Courtside Ventures, co-founder of NYVC Sports, and (in his words) disillusioned Baltimore Ravens fan. Investing at the intersection of sports, fitness, media, and technology, Deepen says he "feels lucky to work in the field he's been in love with his entire life." Deepen, along with powerful backers in Cleveland Cavaliers owner Dan Gilbert, George Pyne’s Bruin Sports Capital and British advertising company WPP, has helped the Courtside Ventures become a major firm helping several well-known entities take significant leaps. Since taking the position 2 years ago, he's made investments in over 20 early-stage companies. On the podcast, we discuss how Deepen got into venture, the principle differences between venture investing and other forms of private equity and debt, we do our best to forecast the future of broadcast media among major sports properties, and give advice to the aspiring sports business analyst. “It’s a challenge, but the game of venture is not for the faint of heart.” Suiting Up is a show that explores the psychology, playbook of tools, and strategies of the most influential people in sports, entrepreneurship, and entertainment.

Complex is a media platform and an online community that publishes the best, most diverse and most relevant voices in pop culture. It...
Let's Go!

Erika Nardini is the CEO of Barstool Sports, a hardcore New England sports fan (Go Coach Belichick...also a podcast guest), and one of...
Let's Go!