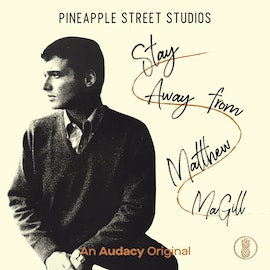 A life in the theater, a pet monkey, and a new understanding of Matthew.

A strange man arrives in a small town.
Let's Go!

Matthew goes on the run. A pattern emerges.
Let's Go!

When Matthew MaGill died alone in the woods on the Florida-Georgia border, he left behind a box filled with the artifacts of an incredible life: from Broadway in the 1970s, to a 747 hijacking, to the culture of drugs and luxury cars in 1980s Florida. A series of coincidences leads reporter Eric Mennel to the box, sending him on a five-year search to understand the truth about its owner. But as Mennel learns who Matthew MaGill really was, he is confronted with questions about his own life, his own mistakes, and his own family secrets.