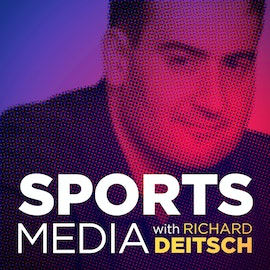 Episode 33 of the Sports Media Podcast with Richard Deitsch features two guests: Chelsea Janes, the Washington Nationals beat reporter for the Washington Post who will move from that beat after the new year to cover the 2020 Presidential election; and Bruce Feldman, a college football reporter for The Athletic and a football sideline reporter for Fox Sports. In this podcast, Janes discusses her upcoming move from covering MLB to the 2020 Presidential campaign; how her new assignment came to be; the challenges of covering politics and getting new sources; how she has approached social media and political opinions; how baseball is a good training ground for the political road; whether she thinks she will return to sports; covering the Nationals and specifically the specter of Bryce Harper leaving the franchise; what she thought of the Patrick Corbin signing and what she thinks of the Nationals in 2019; the prospect of covering the next President of the United States; and much more. Feldman discusses college football podcasts and why there are not as many as other sports; the roles of college football media people in 2019; how important it is for him to be a newsbreaker; his leaving ESPN and whether he still has hard feelings from that episode; how he navigates his broadcast work with reporting for The Athletic; the value of being on TV for reporting; the deification of college coaches on college broadcasts; whether game coverage is the appropriate place for issue-oriented discussions, and much more. You can subscribe to this podcast on Apple Podcasts, Google Play, Stitcher and more.

Episode 34 of the Sports Media Podcast with Richard Deitsch features a sports media conversation on ESPN with James Andrew Miller, the...
Let's Go!