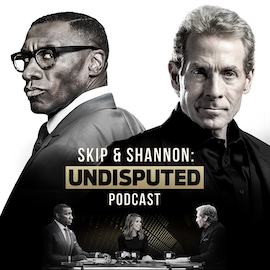 -Who will win tonight: Cowboys or Bears? (01:02)-What do you make of what happened with LeBron’s traveling “malfunction” against the Jazz? (23:13)-Was it disrespectful for LeBron to give his shoes away and celebrate on court in his socks after Kuzma’s block last night? (37:19)-Do you agree with PFF’s rating that Dak Prescott is the league’s 2nd most valuable player. (51:46)-Chris Broussard joins to discuss whether or not the Lakers could be an all-time great team. (57:20)-Skip and Shannon react to Tim Ryan’s comments about Lamar Jackson. (1:10:40)-Do you like Jason Witten’s supportive comments about Jason Garrett? (1:19:56)-Will tonight’s game be more about Dak or Zeke? (1:30:06)-Do you agree with Troy Aikman that the Cowboys’ front office isn’t allowing Jason Garrett to do his job? (1:38:42)-Do you like Baker Mayfield saying he would play because “Mama didn’t raise a wuss?” (1:46:33)

-What do you make of what happened with LeBron’s traveling “malfunction” against the Jazz? (00:38)-Was it disrespectful for LeBron to...
Let's Go!

The Skip and Shannon: Undisputed Podcast. Skip Bayless, Shannon Sharpe, and Jenny Taft discuss the biggest stories in the world of sports. It's unscripted and unfiltered. Don't miss the television show Monday-Friday at 9:30am ET on FS1.