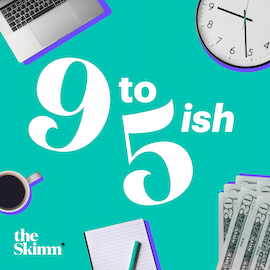 Both Christina Applegate and Linda Cardellini started their careers when they were really young. Christina shot her first commercial before she could walk and talk. And Linda’s first big role was in college, on “Freaks and Geeks.” They’ve been everywhere since then. But if you’ve logged into Netflix in the last week, you might know that they’re now co-starring on Dead to Me. It’s a new series that’s part comedy. Part tragedy. And allll binge-worthy. On the Couch, Christina and Linda talk to us about how Time’s Up has changed the way they negotiate and how they handle not getting a callback. Plus they take a few questions from our live studio audience. PS: This week’s Skimm Reads is brought to you by … our team. They recommended “Grit” by Angela Duckworth. It’s all about how success takes hustle and, yes, grit. Get it here.

Joi Gordon, CEO of Dress for Success: “Find your purpose and your passion.”

Joi Gordon is the CEO of Dress for Success. That’s the nonprofit that provides low-income women clothing and career counseling to help...
Let's Go!

Poppy Harlow is an anchor on CNN Newsroom. She’s the host of the podcast Boss Files, where she talks to badass leaders about how they...
Let's Go!

The work advice you need, from women who’ve been there. Every week, join the co-founders and co-CEOs of theSkimm, Carly Zakin and Danielle Weisberg, as they help you get what you want out of your career by talking to the smartest leaders they know.