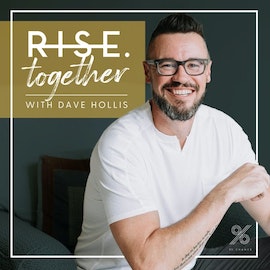 184: Can You Create Space For Your Purpose? - with Jeff Lerner

184: Can You Create Space For Your Purpose? - with Jeff Lerner

Ladies and Gentlemen! Welcome to another episode of Rise Together with Dave Hollis! This week Dave has the one and only Jeff Lerner on the show.In November 2008 during "the Great Recession" Jeff Lerner found himself at rock bottom. A former professional piano player Jeff found himself nursing an injured wrist, evicted from his apartment, being divorced by his wife, struggling with depression, and owing creditors almost half a million dollars from a failed restaurant venture. Fast forward to now and Jeff is a 3 time INC 5000 CEO with over $100 million in sales to his name who is also happily remarried with 4 beautiful children and living his dream life. In 2019, a decade after turning his own life around, he founded ENTRE Institute, the world's first institute of higher learning for entrepreneurs, which is now one of the fastest-growing education-technology companies in the world. He currently splits his time between running ENTRE Institute and appearing in the media inspiring others with his remarkable turnaround story.We hope you enjoy this episode of Rise Together. Let's GO.-----------------------------------Dave's book Built Through Courage is available now! Dave was recently confronted with the fact that he was living the life someone else wanted for him. After weathering a highly publicized personal crisis amid the backdrop of an international pandemic and navigating the enjoyable but unpredictable waters of being a single father to four kids, he has been forced to become the captain of his own life and is ready to teach others how to do the same.I want to be your coach. Yes, YOU! Join me at Growth Day, not for pre-taped lessons, but for weekly LIVE coaching. Click the link and gain access to my coaching + some of the world leaders in personal growth like Brendon Burchard, Jenna Kutcher, Jamie Kern Lima, and more! -> http://bit.ly/daveatgrowth

There Is Nothing Wrong With You - with Jeffrey Marsh (Rebroadcast)

Here is one from the archives. An amazing and very important conversation with Jeffrey Marsh.Ladies, Gentleman and Non-Binary folks,...
Let's Go!

This week on Rise Together, Dave is talking about regret. If you are someone who has let regrets overwhelm or even hijack your mental...
Let's Go!

What if we worked as hard to listen to someone else’s truth as we did to share our own? Each week author Dave Hollis brings radical candor straight to your headphones via breathtakingly real conversations with authors, activists, and anyone with a story to tell. The results are poignant, hysterical, and heartbreaking - sometimes all inside the same episode. Catch new content every Thursday.