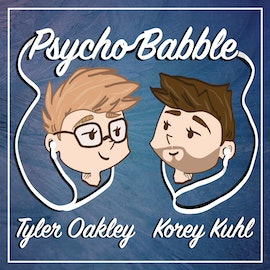 Reel in this week’s conversation with special guest Nev Schulman! After discovering that his internet girlfriend wasn’t exactly the woman of his dreams, Nev started MTV’s Catfish, a show about the mysterious world of online dating. Hook your ears into this sneak preview of his Catfish episode with Tyler, the fateful flight that snagged them into a friendship, and the celebrity who Nev should fish for next.

Hold your nose - this week is a shit show! In the “worst episode ever,” Tyler and Korey relive their glorious and gruesome childhood...
Let's Go!

Belt out your love for Kelly Clarkson! In honor of her latest album, Tyler and Korey feature this American sweetheart for the second...
Let's Go!

It's not just crazy talk, it's Psychobabble - the official free audio podcast from YouTube sensation Tyler Oakley. Listen each week as he and his bestie Korey Kuhl bring you a half hour of unfiltered gossip sessions, pop culture scrutiny, and stories never told before.