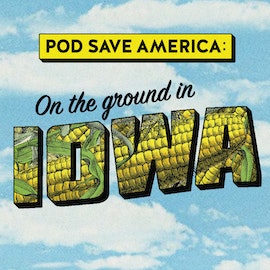 This is the first episode of a five-part miniseries on the Iowa caucuses hosted by Tommy Vietor and produced by Pineapple Street Studios. In episode one, Tommy looks back at Barack Obama's 2008 Iowa operation to explain how he won, how that victory propelled him to the White House, and why Obama says his Iowa caucus victory was more meaningful than the night he was elected president. Tommy also heads to the Iowa State Fair to talk with 2020 candidates and introduces you to some young campaign field staffers who we'll follow for the next few weeks.

“He loves your ass.”

Rep. Adam Schiff joins to break down all of the latest impeachment news, Pete Buttigieg takes the lead in Iowa, and Elizabeth Warren...
Let's Go!

“All that pizzazz.” (Debate recap special!)