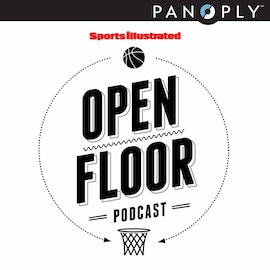 In the latest episode of the Open Floor Podcast, SI.com's Andrew Sharp and Ben Golliver take a deep dive into James's mind games and the recent drama he's started on social media. Sharp and Golliver examine LeBron's decision to unfollow the Cavaliers on Twitter and his strange public response when asked about it. They also try and figure out what kind of message LeBron is trying to send and who it is directed at. Later, the hosts discuss LeBron's comments that he wants to play with Carmelo Anthony, Dwyane Wade and Chris Paul and whether or not that's potentially feasible. Also discussed in this week's show: the rising Boston Celtics (and Sharp's magazine feature on them), Carmelo Anthony's irrelevancy in New York, Kevin Durant to the Spurs, the inevitable Warriors-Spurs showdown and a little NCAA tournament talk. If you want to get in touch with the show, tweet Andrew Sharp at twitter.com/andrewsharp or Ben Golliver at twitter.com/bengolliver, and use the hashtag #openfloor to have your voice heard. You can find more great Sports Illustrated podcasts at si.com/podcasts, and please subscribe to the show on iTunes, Stitcher and SoundCloud.