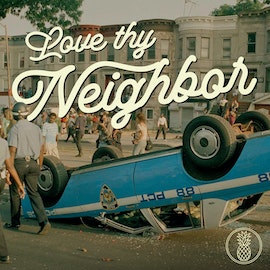 After four days of unrest, the energy in Crown Heights seems to have calmed. Still, residents are eager to hold someone responsible for the deaths of Gavin Cato and Yankel Rosenbaum. In comes Rudolph Giuliani and the violent policing tactics Americans are far too familiar with today.

It’s a warm evening in August 1991. Two Guyanese children are playing on the sidewalk when a car in the Lubavitcher Rebbe’s motorcade...
Let's Go!

Thirty years ago, in the Brooklyn neighborhood of Crown Heights, a car accident set off four days of unrest. Two people died. Dozens were injured. Hundreds were arrested. In this Pineapple Street Studios series, journalist Collier Meyerson explores what came to be known as the “Crown Heights Riot.” It’s a story about immigration, New York City’s first Black mayor, the rise of Rudy Giuliani, and the Lubavitch Jewish and Caribbean-American communities sitting at the center of it all. To Meyerson, the Crown Heights Riot can help us unlock and understand so many of our modern dilemmas: from police violence and racism to the persistence of antisemitism.