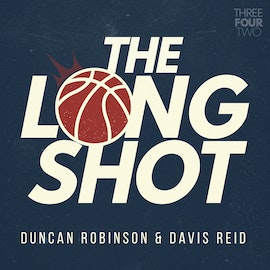 Episode 2: Andre Iguodala | “When you are who you think you are”

Episode 2: Andre Iguodala | “When you are who you think you are”

​The list of on-court accolades runs long for Andre Iguodala - NBA All-Star, 3x NBA Champion, Finals MVP, Gold Medalist - but his best attributes may be off the court. Therefore, it's no surprise that Duncan and Davis locked him in to be the first ever interview on The Long Shot, and he does not disappoint. In this wide ranging interview, Andre digs deep into several topics, including leadership, dealing with social media, creating bonds with teammates, and building his budding business ventures. Plus, he goes above and beyond with his answers to the "Undrafted" segment, where he gives some 'insider tips' on some hot products. Shhhhh... we'll keep it just between us. It's all here on The Long Shot.RUNDOWN On Duncan's first impression of Andre and how he got to the point of "just wanting to enjoy the game and have fun" The impression Andre had on Duncan and his teammates in the bubble. On dealing with the media and shutting out the noise in the social media age The process of ignoring the people who focus on the negative Having to deal with fake quotes attributed to him in social media Discusses the players only meeting that took place when the league decided to shut down last year​ On taking the approach of not looking for credit for his actions The value of having someone like Andre on a roster to keep things in order On creating lasting bonds between his teammates Andre breaks down his business career and what he wants to accomplish How does he manage his time between the NBA and his business intentions What person or event in his life changed his perspective and took his thinking to another level

Welcome to the inaugural episode of The Long Shot! You all know Duncan Robinson as the Miami Heat sharpshooter, but his range extends...
Let's Go!

Episode 3: Alex Caruso | “Be where your feet are”

It may seem like Lakers guard Alex Caruso has it all - a blossoming NBA career coming off an NBA championship, fan adoration, his own...
Let's Go!

Celebrating success that is unexpected as well as highlighting sports and human-interest stories are both at the foundation of The Long Shot. Told through the lens of NBA player Duncan Robinson and his co-host Davis Reid, the program will provide an inside look into the NBA season while showcasing stories of those that have overcome the odds and achieved success.