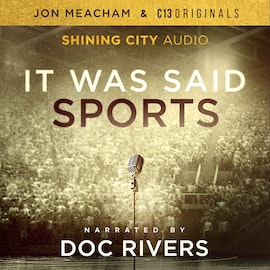 In 2008, expectations were running high for Florida Gators quarterback Tim Tebow. The previous year, the Heisman Trophy winner set many major SEC records and was expected to continue leading the team to success. Tim Tebow joins Doc Rivers to discuss his humbling speech after the Florida Gators took a shocking loss to Ole Miss in 2008. Football coach Urban Meyer and sportscaster Verne Lundquist look back on Tebow’s college career and inspiring moments.

In 1973, Billie Jean King wins the Battle of the Sexes, defeating her male opponent on the tennis court. And off the court, she uses her...
Let's Go!

It’s the Atlanta Braves versus the Los Angeles Dodgers on a warm spring day in 1974. One pitch changed everything when Hank Aaron’s...
Let's Go!

We hold speeches from the world of sports deep in our hearts and minds as timeless and historic moments that still, to this day and beyond, bring us inspiration, historical context, empathy, education and more. We remember these iconic moments so that we too can share them with current and future generations as a way to remember why they touched us personally, and why they remain so relevant and important today. Welcome to It Was Said: Sports, Season one, a documentary podcast that guides you through six of the most impactful and timeless speeches in sports history, including Jack Buck’s “For America” poem following the 9/11 attacks, Muhammad Ali protesting the Vietnam War, Billie Jean King championing equal pay, Tim Tebow’s promise, Hank Aaron’s Hall of Fame acceptance speech, and co-captain Harry Flournoy’s powerful statement on race during Texas Western's Basketball Hall of Fame induction. From the team that brought you the Webby Award-winning Best Series of 2021, It Was Said, comes the sports version of the franchise, narrated by NBA legend, Doc Rivers, written by Pulitzer-Prize Winning Historian, Jon Meacham, and directed, produced and created by award-winning C13Originals Studios, a Cadence13 company. With first-hand perspective behind some of the most memorable and influential moments in sports, propelled by the voice of Rivers, the writing of Meacham and the production of C13Originals, this timeless documentary is meant to inspire, educate, and keep these historical moments as relevant as ever, and for generations to come. It Was Said: Sports is a presentation of Shining City Audio, a C13Originals and Jon Meacham Studio.