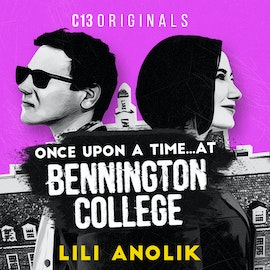 1994 to the present day. Jonathan Lethem comes from behind. And just whose world are we living in anyway—Bret’s, Donna’s or Jonathan’s?

It’s the groves of academe: Bennington College, the wildest and wickedest school in America. In the last great decade: the 1980s. Bennington class of ’86, class of Bret Easton Ellis, future writer of American Psycho and co-leader of the literary Brat Pack; Jonathan Lethem, future writer of Motherless Brooklyn and MacArthur Fellow; and Donna Tartt, future writer of The Secret History and Pulitzer Prize winner. All three are, at various times, infatuated and disappointed with one another, their friendships stimulated and fueled by rivalry as much as affection. And all three will mythologize Bennington in their fiction—fiction that, as we’ll discover, isn’t always fiction, is often fact—and thereby become myths themselves. From the Peabody-nominated C13Originals studios and Vanity Fair's Lili Anolik, comes the latest installment in the “Once Upon a Time…” franchise, Once Upon a Time… at Bennington College. This is a tale of money, murder, madness, and—of course—genius. This is, too, a multi-dimensional expose: the secret history of The Secret History revealed; the secret history of three of the greatest writers of Generation X revealed; and the secret history of Generation X itself revealed. This follows Season One of the franchise, Once Upon a Time...in the Valley, a real-life psychological thriller about underage adult star Traci Lords.