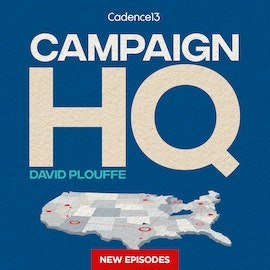 We don’t want another Meadowlands disaster!

We don’t want another Meadowlands disaster!

A lot of little details have to be covered while the candidates are out on the road. Alyssa Mastromonaco shares fun stories from her time as then-Senator Obama’s Director of Scheduling during the 2008 campaign, a preview of what the candidates are in for as we head into January, and that one event that didn’t go so well.Alyssa later served as President Obama’s Deputy Chief of Staff from 2011-2014 and is currently a co-host of Crooked Media’s Hysteria podcast.

Someone who can beat Donald Trump

Justin Buoen, Campaign Manager at Amy for America joins David for a look inside the Klobuchar campaign, and the upcoming challenges of...
Let's Go!

Jonathan Martin, national political correspondent for The New York Times, on how the Times plans to cover the race, and where to keep...
Let's Go!