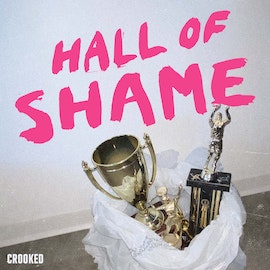 Rachna is going to need Rachel to hold her OWN beer and then get herself another. In 1982, Wade Boggs graduated from the Minor to the Major leagues, where he had a storied career with the Boston Red Sox, New York Yankees, and Tampa Bay Rays. But perhaps more impressive than his more then 3,000 hits, All Star record, and being a first ballot Hall of Famer, is his infatuation with chicken, rampant superstition, and penchant for drinking more beer than any mortal man can or should.

What Happens in Vegas... (the Suzy Favor Hamilton story)

Rachel wants Rachna to talk about it! Like many people, Suzy Favor Hamilton spent much of her life grappling with mental illness. Unlike...
Let's Go!

Fox Sports host and comic Rachel Bonnetta (“Lock It In”, “@Buzzer”) and comedy writer Rachna Fruchbom (“Fresh Off the Boat”, “Parks and Recreation”) are here to share their love for two things: sports and DRAMA. Sure, they obsessively root for Cleveland (the Browns and the Cavaliers, respectively), but they get even more excited by those crazy moments in sports that become almost legendary. We all know the sensationalistic scandals about cheating, gambling and sex, but Rachel and Rachna want to discover the humanity behind the headlines. That’s why they started Hall of Shame -- every week Rachel and Rachna will take each other through some of the biggest scandals in sports, from the thrill of Dock Ellis’ acid fueled no-hitter on acid to the agony of Rosie Ruiz’s fake Boston Marathon win. With humor and a healthy dose of perspective, they get to the bottom of what exactly went down, why these stories matter, and how they’re still relevant today. You’ll laugh, you’ll cry, you’ll feel more invested in sports than you ever thought possible.