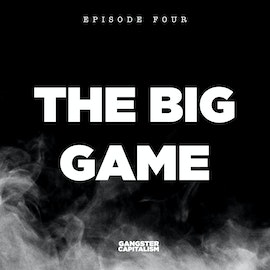 A dream job slowly becomes something very different for a former NRA fundraiser, as ethical questions come to light.

The NRA has a new program to help lift them out of financial despair, and a fresh face to run it. But both turn out to be disasters.
Let's Go!

A financial surplus becomes a deficit once Wayne LaPierre is elevated to EVP, and he is questioned about the relationship with Ackerman...
Let's Go!

Following a Peabody nomination and two Webby nominations for Best General Series and Best Documentary Podcast for Season One: The College Admission Scandal, Season Two of Gangster Capitalism has the NRA is in the crosshairs. This season we dissect how the past year has rocked the country’s most powerful special interest organization like none other. Internal power struggles have exposed the group’s questionable, and possibly illegal practices which now threaten the nearly 150-year old nonprofit like never before. We’re pulling back the curtain to reveal that this has little to do with guns. It’s about money.​ Gangster Capitalism is a creation and production of C13Originals, a division of Cadence13.