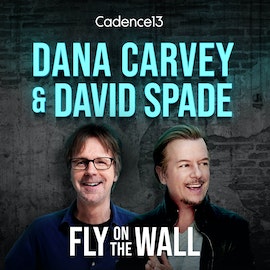 On the surface, there was nothing remarkable about Larry Lavin. He lived in a quiet neighborhood with his wife and family, drove a Volvo, and practiced dentistry in Philadelphia. But, from 1978 to 1984, Dr. Lavin ran one of the largest cocaine enterprises on the entire eastern seaboard. Through the voices and perspectives of law enforcement, drug runners, friends, business associates and Larry Lavin himself, Wolves Among Us, Season One, The Larry Lavin Story, tells the story of Lavin’s dual life, his impact on Philadelphia culture in the late 70s and early 80s, and the stunning events that led to his capture. Wolves Among Us is a presentation and creation of Peabody-nominated C13Originals, a Cadence13 Studio.

Be a “Fly on the Wall” as Saturday Night Live alumni Dana Carvey and David Spade take you behind the scenes to reminisce about the most memorable stories and moments with friends of the show. In each episode, you’ll hear from your favorite cast members, hosts, writers, and musical guests as they share never-before told stories about their careers; including how they made their way to the show and how being a part of SNL’s cultural history has impacted their lives beyond the show. Fly on the Wall with Dana Carvey and David Spade is a presentation of Cadence13.