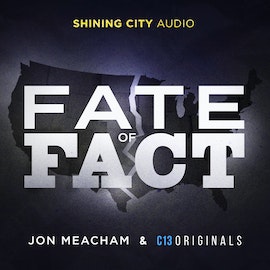 The C13Originals Peabody nominated series is back for Season Three: Jerry Falwell Jr. and Liberty University. A sex scandal rocks one of the world’s largest Christian universities, and the man at the center of it. But that scandal is just the beginning. The award-winning Gangster Capitalism team spoke with more than 80 former and current Liberty students, faculty, staff, high-ranking administrators, and those with intimate knowledge of Falwell Jr. What emerges is the inside story of how the university, and the family who founded it, have been rocked by power, greed, hypocrisy, and of course money.

To Bend The Arc

Progress isn’t inevitable. Justice is forever elusive. Liberty is always fragile. What will it take for America to find its better angels?
Let's Go!

Fate of Fact is a presentation of Shining City Audio, a C13Originals and Jon Meacham studio. Throughout the course of five episodes in season one of this audio documentary, Pulitzer-Prize winning and best-selling historian, Jon Meacham and esteemed guests, will explore the question of how fear conquered truth, the history and origins of the strong grip misinformation and disinformation have on our politics, and how we got here today. Meacham will trace the roots of America’s prevailing culture of polarization, with an emphasis on why the right has chosen to break with a governing consensus that, however imperfect, was once embodied by the figurative conversation between Franklin Roosevelt and Ronald Reagan. Fate of Fact offers a historically grounded perspective on the forces that led to the presidency of Donald Trump and the insurrection of January 6—an attack on the Capitol and on democracy as grave as any American moment since the Civil War.