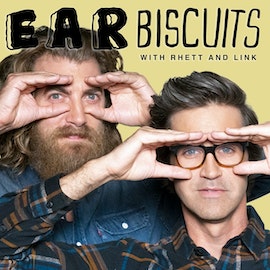 You asked, we settle! This week, Rhett and Link settle your long-standing arguments you’ve had that have been tearing your relationships apart! They settle disagreements across the spectrum from hilarious to life-changing, including when a chicken ceases to be considered “raw,” the official rules of calling shotgun, & whether a couple should consider moving in together despite the family’s reservations. Plus, Rhett details his red carpet meeting with Conan O’ Brien and his wife which culminated in him dropping his pants in front of them.Read all of the arguments that were submitted on this thread!Check out Rhett's Rec of the Week and unwind at Neal.fun (not affiliated with Link Neal), including "Let's Settle This" where the internet settles long-standing internet arguments.Want to have your tweet/story/idea featured on Ear Biscuits? Follow @Mythical so you don't miss the next prompt!Also, Stevie's got a new podcast! Best Friends Back, Alright! is out now! Subscribe now on Apple Podcasts, Spotify or anywhere you get your podcasts so you never miss an episode!

Rhett & Link welcome their other best friend, Gregg Hartsfield AKA the rightful owner of the bass on Good Mythical Morning, to reminisce...
Let's Go!

This week, Link details his family spring break trip to Park City, Utah. He describes the trouble he got into with bringing his dog on...
Let's Go!