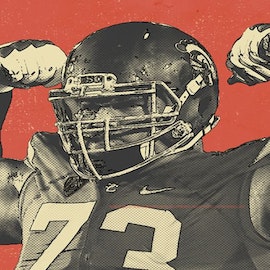 At USC, 6' 8" offensive lineman Zach Banner nearly topped 400 pounds. Now he's trying to prove to the NFL that he can trim his weight down to a more reasonable number—and keep it there. Lindsay Schnell chronicles Banner's quest, from an upbringing in which he always stood out to a pre-draft process in which he is working to fit into the NFL mold.

To get to the University of West Georgia in tiny Carrollton, Alex Armah had to drive 88 miles from his parents’ house in Dacula, Ga....
Let's Go!

Think about the toughest job interview you’ve ever had. Now imagine that interview was monitored by more than 30 million people worldwide, and involved, somehow, being measured and judged in your underwear. For hundreds of 20- to 22-year-olds every spring, this is an unblinkingly natural part of vying for a roster spot in the NFL. Every week SI’s Draft Season will take you behind the scenes of this crazy and fascinating world of the NFL draft.