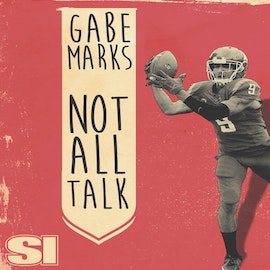 Gabe Marks has spent his entire football career hearing how he’s too small and too slow, but no one could ever accuse him of having too little personality. The Washington State wideout earned a reputation for telling it like it is at press conferences throughout his college career, leading to more than a few viral moments. Now he's preparing to be drafted into the NFL, where teams tend to look a little less fondly on unexpected headlines from outspoken players. In the final episode of the season, Lindsay Schnell gives Marks the mic one more time to dig into the person behind the one-liners, a prospect trying to prove he's not all talk. This episode of Draft Season was produced by Alex Abnos. Theme song by Alex Abnos. Logo and artwork by Harry Swartout. This episode uses music by Podington Bear and Chris Zabriske.

To get to the University of West Georgia in tiny Carrollton, Alex Armah had to drive 88 miles from his parents’ house in Dacula, Ga....
Let's Go!

Think about the toughest job interview you’ve ever had. Now imagine that interview was monitored by more than 30 million people worldwide, and involved, somehow, being measured and judged in your underwear. For hundreds of 20- to 22-year-olds every spring, this is an unblinkingly natural part of vying for a roster spot in the NFL. Every week SI’s Draft Season will take you behind the scenes of this crazy and fascinating world of the NFL draft.