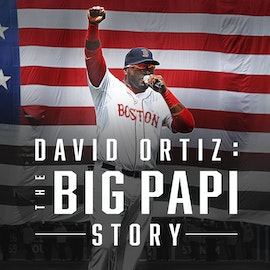 Cadence13 and The Players' Tribune

“Big Papi” brings the Sox two more titles. But along the way, the obstacles become much bigger. He has one of the worst slumps of his career, the media calls for his release, and finally, he's named in a PED scandal that rocks baseball and Papi's life. In typical Big Papi fashion, he bounces back, but then things get much darker in Boston in April of 2013. David Ortiz speaks for all of us when he addresses the city in its most trying moment, following the Marathon Bombing, and in doing so, he ingrains himself into the fabric of the city. Papi dominates the World Series that year to culminate an emotional season, and ultimately, he changes the generations old perception in Boston of what a hero looks and sounds like.​

Coming on Patriots' Day April 16th, David Ortiz: The Big Papi Story captures the spirit of Boston, a city with no shortage of sports...
Let's Go!

“Big Papi” becomes an "Idiot." His personality puts him at the center of the Sox's crew of hilarious misfits, and he is the key...
Let's Go!

David Ortiz: The Big Papi Story captures the spirit of Boston, a city with no shortage of sports icons, and celebrates the rise of a man from the Dominican Republic who willed himself to greatness — and who, in the process, changed the culture of an entire city. In addition to Ortiz’s successful playing career, the series (Executive Produced by Emmy Award winner Zak Levitt and narrated by Michael Chiklis) will examine pivotal moments in his life off the field, from his difficult assimilation into American culture, to the sudden and tragic loss of his mother, to the raw emotion he shared with Hub fans following the tragic Boston Marathon bombing in 2013.​