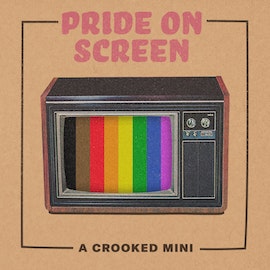 Tre’vell Anderson, Director of Culture and Entertainment for Out Magazine, kicks off the first episode in a new series looking back at notable LGBTQ+ moments in film and television.Tre'vell is first joined by Jon Lovett. They discuss a moment in television that impacted Jon's life and imagine what a more inclusive future could look like. Then, Tre'vell is joined by legendary actor Darryl Stephens and Jeffrey Masters, host of the podcast LGBTQ&A, to take a look at gay men on screen and discuss how these representations have impacted them, and us, in real life.

June's series, "Pride on Screen", hosted by Tre’vell Anderson, director of culture and entertainment at Out Magazine, launches...
Let's Go!

As part of June’s Pride on Screen series Tre’vell Anderson is sitting down with some of the great minds in the LGBTQ+ community to talk...
Let's Go!

Crooked Minis takes a step back from the chaotic breaking news to offer a new series every month that explores an issue or event that reflects cultural, political, or societal changes in America and need more than a 10-minute conversation and a split-second news cycle to unpack.