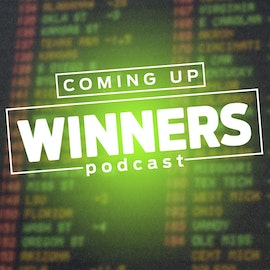 JMac and Lynch recap their bets from their STRONG CFB Championship picks and a scary Week 13 slate. Before that, we dive into some of the big storylines from from the weekend that was, JMac pays up on his #PutUpOrShutUp bet, the game where YOU the listener have an opportunity to win cold hard cash from the crew, followed by some early line changes that you will see throughout the week for next weekend, and an in-depth look at the Monday Night Football game Redskins @ Eagles. Don't forget to subscribe and leave a review!

JMac and Lynch breakdown the hottest games of the Week 13 slate. We dive right in with a little game we like to play called...
Let's Go!

JMac and Lynch breakdown the hottest games of the Week 14 slate. We dive right in with a little game we like to play called...
Let's Go!

Coming Up Winners is a interactive gambling podcast dedicated to making YOU a smarter gambler. Hosted by FS1 host Jason McIntyre & sports guru Andrew Lynch, the two team up to give you a realistic and analytical view inside the biggest games of the week every Monday and Thursday. Did we mention YOU the listener will have multiple chances to take cold hard cash from this crew? All this and MORE only on the Coming Up Winners podcast!