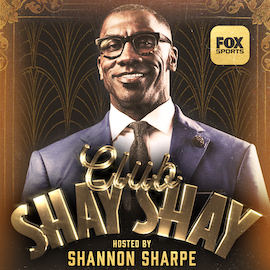 On episode 16 of Club Shay Shay, Shannon welcomes in Super Bowl champion, 7-time Pro Bowler, & Hall of Fame defensive tackle Warren Sapp.Shannon & Warren dive right in to the current state of the NFL, with Sapp’s prediction that the hometown Bucs will come out victorious against the Chiefs in Super Bowl LV. Warren also delves into his own career in Tampa Bay, where he won Super Bowl XXXVII against the Raiders. All aspects of Sapp’s career are covered, including his transition from tight end to defense at the University of Miami, where he played with Ray Lewis and Dwayne “The Rock” Johnson. Sapp reveals his Mount Rushmore of players from “the U,” and walks Shannon through the process that led him to become the No. 12 overall pick in the 1995 draft.Shannon & Warren go in-depth on Sapp’s NFL career, discussing the Tampa-2 defense, winning Defensive Player of the Year, and playing for Tony Dungy and Jon Gruden. Warren also talks about his controversial block and confrontation with Mike Sherman of the Packers in the 2002 season. And we hear about Sapp’s post-playing career as a brutally honest analyst, as well as his passion for fishing.#DoSomethinB4TwoSomethin & Follow Club Shay Shay: https://www.instagram.com/clubshayshayhttps://twitter.com/clubshayshayhttps://www.facebook.com/clubshayshayhttps://www.youtube.com/c/clubshayshay