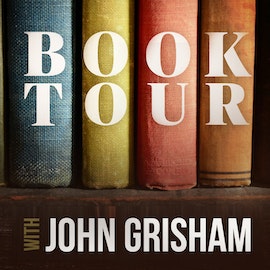 This week on Book Tour with John Grisham: Grisham's first book tour in 25 years - since THE PELICAN BRIEF in 1992 -starts with a visit to Northshire Books in Manchester Center, VT. Grisham speaks about books, writing and many other topics with Northshire owner Chris Morrow; his longtime literary agent and editor, David Gernert (who tells he story of acquiring THE FIRM); and New York Times bestselling author of SMALL GREAT THINGS, Jodi Picoult.

Join bestselling author John Grisham for his first bookstore tour in twenty-five years! On the Book Tour with John Grisham he will travel the country, meeting with and taking questions from book lovers everywhere. Each episode of the thirteen-city tour will also feature a lively discussion between John and another notable author, discussing everything from their latest works to their personal writing process to the ins and outs of the publishing world to their favorite books and beyond.