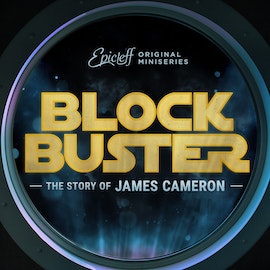 Bonus Archival. This special extended episode contains original news reports of the "greatest ocean discovery in history" on September 1, 1985. First is CTV's original report the evening of the discovery, and then ABC's World News Tonight with Peter Jennings, and the CBS Evening News with Dan Rather. After this, CBS News and ABC News continue their coverage with the questions around who owns the ship, and excerpts from the 1986 documentary "Titanic: The Nightmare and the Dream." Lastly, Dr. Robert Ballard speaks about his discovery, and the top-secret military origins of the mission that found Titanic.This award-winning 10-part original miniseries stars Ross Marquand (The Walking Dead, Avengers: Endgame) as up-and-coming writer-director James Cameron, and tells the story of how he fought through decades of personal struggles and career setbacks to assemble the most expensive and grueling movie production of all-time, Titanic, that nearly sank two film studios.If you enjoyed BLOCKBUSTER, please consider a small donation to help the creators continue making this series at http://GetBlockbuster.com/support and receive bonus perks, and your name in the credits! Facebook: http://facebook.com/BlockbusterPodTwitter: http://twitter.com/Blockbuster_PodInstagram: http://instagram.com/blockbusterpodFollow series creator @MattSchrader on Twitter🏆 Blockbuster is now an award-winning podcast! Winner of Adweek's Creative Podcast of the Year, two NYF Radio Awards, and Webby Awards Honoree for Best Miniseries.Thanks in advance for sharing Blockbuster with a friend!

James finishes filming on The Terminator, only to see the film disappoint. James marries his producer Gale, and fights for Sigourney...
Let's Go!

Award-winning miniseries about the filmmakers who revolutionized the movies. Season 1: George Lucas, Steven Spielberg and the 1970s Movie Revolution. Season 2: The Story of James Cameron. It's a movie for your ears.