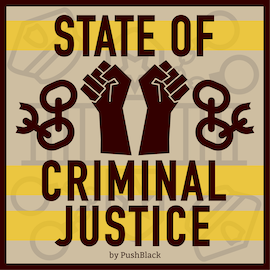 What’s up fam, thanks for tuning into another episode of Black History Year. On this show, we connect you to the history, thinkers, and activists who are left out of mainstream conversations. But this week, we’re switching it up. Instead of our usual show, we’re sharing an episode of PushBlack’s newest podcast, “State of Criminal Justice.” State of Criminal Justice digs into the most important events happening right now in the legal system. Every week, we discuss pressing issues that have an immediate impact on Black America, and the new ground being made to transform the criminal legal system.The future of our community depends on us understanding how injustice systematically operates in this country. State of Criminal Justice is here to ensure you’re always up to date on how institutional racism is impacting Black people nationwide. You can find State of Criminal Justice by PushBlack on Apple podcasts, Spotify, or anywhere you listen to podcasts. Thanks for the support.Subscribe on Apple Podcasts: https://podcasts.apple.com/us/podcast/state-of-criminal-justice-by-pushblack/id1573270743Subscribe on Spotify: https://open.spotify.com/show/3PfYaYylD4a9C0iQXHK4zL?si=GG8iyYQVTRmwqUlEO_bfLA&dl_branch=1In this week’s edition, we’re discussing police ties to the assassination of Haiti's President Jovenel Moïse, how Muslims are underserved by prison chaplains, and the sentencing of police who beat a fellow Black officer. In our New Ground segment, we’ll tell you about a new group called Georgia Moms United that’s coming together to fight injustice.U.S. Police Ties In Haitian President’s Assassination New information reveals disturbing connections. Muslims Underrepresented by Prison Chaplains Incarcerated Muslims are facing a huge shortage of chaplains. Police Sentenced for Beating Fellow Black CopLuther Hall’s fellow officers who brutally beat him have been sentenced. New Ground: Support Georgia Moms United Fighting for JusticeGeorgia families are coming together to fight state violence. Support the organization on GoFundMe.

Celebrating Juneteenth in the Carceral State with Ebony Underwood

Juneteenth is a special holiday for Black people - it commemorates when the last of our enslaved ancestors were freed. And yet, many...
Let's Go!

It's a question that requires tapping into your imagination. A question that forces you to explore the possibilities within freedom. And...
Let's Go!