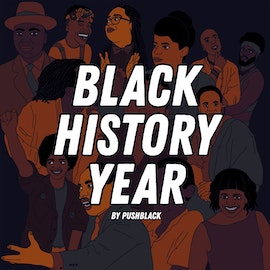 The African Foundations of Civilization with Dr. Runoko Rashidi

The African Foundations of Civilization with Dr. Runoko Rashidi

In this episode, our story begins in Nubia and the Nile Valley, the Kingdom of Kongo, the Mali Empire, and the Great Zimbabwe. Dr. Runoko Rashidi reveals how the origins of Black people lie in great, ancient African civilizations and how our hidden history spans the globe. BHY is produced by PushBlack, the nation's largest non-profit Black media company - hit us up at BlackHistoryYear.com and share this with your people!PushBlack exists because we saw we had to take this into our own hands. You make PushBlack happen with your contributions at Black History Year dot com. Most people do 5 or 10 bucks a month, but everything makes a difference. Thanks for supporting the work. The Black History Year production team includes Tareq Alani, Patrick Sanders, William Anderson, Jareyah Bradley, Brooke Brown, Shonda Buchanan, Eskedar Getahun, Leslie Taylor-Grover, Abeni Jones, Akua Tay, Darren Wallace and our producer, Cydney Smith.For Limina House, our producers are Jessica Rugh Frantz and Sasha Kai Parker, who also edits the podcast. Black History Year’s Executive Producers are Julian Walker for PushBlack and Mikel Ellcessor for Limina House. Useful links:"The Black Image in Antiquity: Beautiful, Royal and Divine" by Runoko Rashidi"The Destruction of Black Civilization" by Chancellor Williams“The Cultural Unity of Black Africa” by Cheikh Anta Diop"They Came Before Columbus" by Ivan Van Sertima

The Power of the Black Voter with Nse Ufot

Welcome to Season 2 of Black History Year.In everything we do at PushBlack, we’re always asking, “How do we work together to make things...
Let's Go!